This is an early Gerry rucksack. As I’ve probably mentioned in other posts, the earliest outdoor gear was simply repurposed military surplus and this bag shares many characteristics.  Beyond the olive drab nylon the bag resembles very much a European military pack. Specifically one from a company called Bergans of Norway , which was made of more traditional materials, canvas and leather.

Though the design itself may not have been revolutionary or visionary the removable lightweight back panel is.  I believe the panel to be made of fiberglass, but may just be something similar. The removable panel replaces metal support systems used on earlier packs. The updated support system with the use of lightweight nylon saved this traditional design many extra pounds. 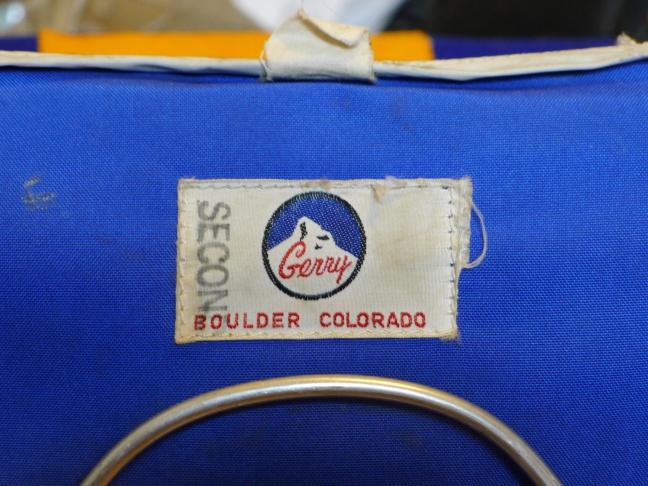 Early Gerry external frame pack. This pack bears the Gerry Boulder, Colorado label and denotes production prior to the company being purchased by Outdoor Sports Corporation. This pack exhibits many of the common traits that came to dominate external frame pack construction in the 1970s up through the 1980s, but has its differences. The white leather bottom for instance is a great touch and common for construction of day packs which are often sat on the ground, but the added weight of the leather and lack of need for a toughened bottom would mean it was a feature not built to last. Secondly the one main compartment could make getting to what you needed on the trail difficult if packed incorrectly. This one large compartment construction would soon give way to more compartmentalized construction. (Gerry’s later Vagabond pack would take compartmentalized to whole new levels). The primitive waist strap is also an area later designs would improve upon. Though this bag does feature the patented buckle design it bolts directly to the frame and does not form a full padded belt. This is before the notion of “shoulder the load with your hips”

Beyond its shortcomings the pack is still beautifully designed and constructed. There are four canister style side pockets with leather pull tabs (missing on one). The bag is constructed of 100% nylon which was probably still somewhat exotic in its time. Padded shoulder straps. There’s also a pretty ingenious handle built into the frame.

The label is marked ‘Second’ meaning they found there was something wrong enough with it to not be sold as new, or possibly it was a prototype model later sold as a second. A small tag above the label has it sized a medium. Definitely a cool bag for any collection or use for its intended purpose.

Here it is, one classic Gerry reversible Green/Blue Down vest. This vest features two hip pockets on the Green side with embroidered Gerry Triangle Logo. The label lives inside one of the pockets making for a  clean Blue reverse side. Both sides have the logo embroidered snaps.

Gerry is the iconic label that pioneered a new era in outdoor gear. Founded in the mid 1940s by Gerry Cunningham in Colorado the company was responsible for several outdoor gear innovations and a leader in quality and technology through the 1970s.