Good example of this somewhat iconic tent. Not free-standing but keeps itself up when staked at the corners. Very sturdy when rain fly is pulled over the top. Fly comes all the way to the ground. Guy lines provided added steadiness in any weather situation. Great shape. Allows two occupants to sit fully upright with plenty of room to spare over head. Tabs in the corners of the ceiling lead me to believe a gear hammock was available for inside. Not a ton of space for gear with tow occupants and only enough vestibule for the rain fly for boots, and other odds and ends not needed inside. 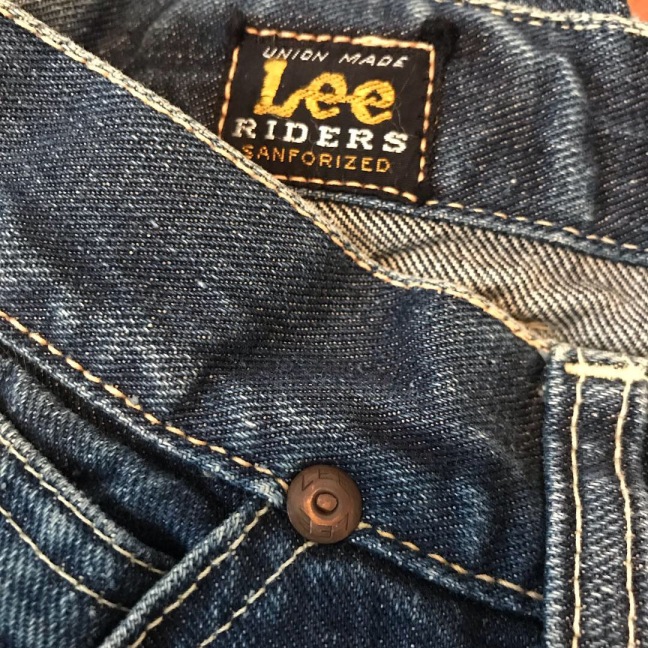 Great 1950s Lee Riders. Half Selvedge denim construction with a Scovill Gripper Zipper zip. This particular pair of jeans measured about 28×28, but had been taken in at the waist and down the outer seams of both legs to construct a slimmer fit. The indigo was still dark,  a desirable trait for jeans of this age.  See my other Lee Riders post for an example of a slightly later pair. 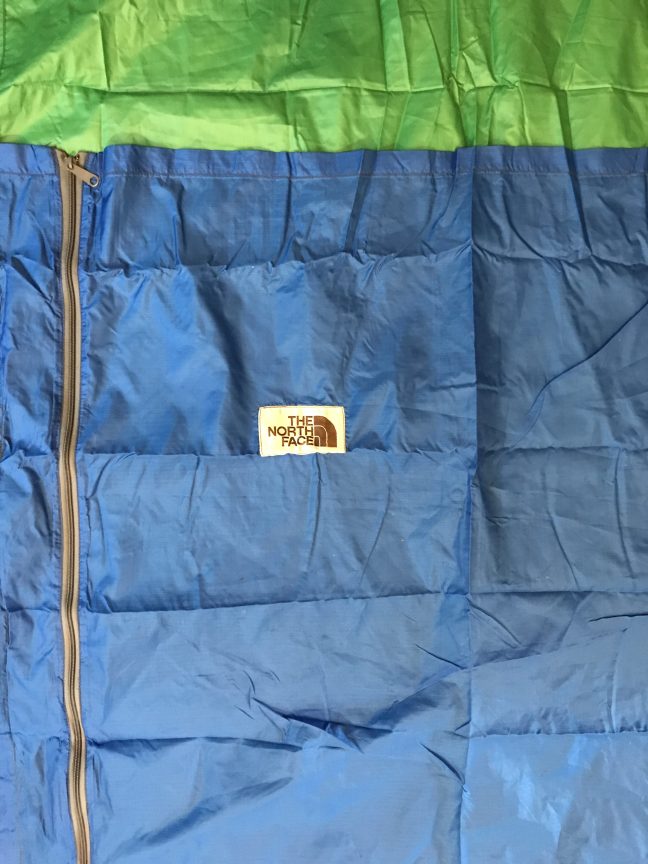 Unique early TNF Bivy Sack. Simple construction of one ply rip stop nylon in blue and green. Grommets at the corners for staking down. Not entirely sure if this was the complete unit or if there would have been a tarp or tube tent covering. Good for a layer of wind proofing and would keep your bag clean as is though.

This is an early Gerry rucksack. As I’ve probably mentioned in other posts, the earliest outdoor gear was simply repurposed military surplus and this bag shares many characteristics.  Beyond the olive drab nylon the bag resembles very much a European military pack. Specifically one from a company called Bergans of Norway , which was made of more traditional materials, canvas and leather.

Though the design itself may not have been revolutionary or visionary the removable lightweight back panel is.  I believe the panel to be made of fiberglass, but may just be something similar. The removable panel replaces metal support systems used on earlier packs. The updated support system with the use of lightweight nylon saved this traditional design many extra pounds.

Example of a civilian model jacket design based on the N-1. The N-1, to a lesser extent of then the Air Force A-2, MA-1 and N3-B became somewhat legendary for being a well-serving, functional jacket. The problem is one had to enlist and end up in certain positions to receive one. Post WWII patterns and probably sometimes even surplus were converted for civilian use. Today you still see similar jackets being produced by everyone from Schott to Abercrombie and Fitch.

The Jacket seen here has a very similar cut and fabric composition as a Navy issue N-1. Unfortunately the liner is made up of a blended pile and not what would have been alpaca. Still the rugged cut and warmth make these civilian versions a great option for someone who wants the style at a fraction of the price for an original.

These jackets are the same pattern as the A2 deck jackets but made with Aramid fire resistant material. Buttons on the A2 are replaced with Velcro. This jacket was from Point Mugu Naval Air Base.

Barker Shoe Co. 10th Mountain Division ski boots. Boots are dated 1943  Produced in Boston.  This example has original waxed laces with metal ends. Also the wool foot bed for insulation. Goodyear heavy lugged sole provides traction when not full of snow or mud. From what I understand the original design had a flat sole, but traction was impossible so they later retrofitted these boots with the lugs. Squared off toe allows for maximum heel lift during cross-country maneuvers.

All pieces named J.H. Fales.  Believed to be an early Radarman uniform based on the left facing eagle patch.

While Gerry Cunningham lead the “warmth without the weight” down movement here in the states,  the Moncler company followed suit on the other side of the Atlantic. The company founded in 1952 enlisted the help of famed explorer Lionel Terray to help with the design of its expedition weight jackets in early 1960s. The result is what you see here.

This particular coat was found with a coyote fur hood liner which was a later add. It had button holes around the edges for attachment to a NB-3 or similar military parka. Given the condition of the fur, which appeared to have been laundered, I decided to remove it and bring the jacket back to original. A solution of baking soda and water was applied to the heavily soiled areas around the collar cuffs and front and left to soak in the tub. You’ll see in the pictures the incredible amount of dirt that was released.  The coat was then agitated by hand and rinsed thoroughly.

These coats contain a great deal of down giving them the loft needed to sustain the wearer in arctic conditions. The two rows of snaps allow for an adjustable fit in order to accommodate varying layers of clothing underneath.  Zippers are not used as thy can be a hassle in arctic temperatures and a malfunction of one would be a pretty grim reality in the cold. The coat also does not have any pockets which could become filled with snow and create compromised areas for which the cold can make its way in. Candidly speaking, I rather enjoy having accessible pockets in my coat. See my post on the later REI Expedition Down Coat for comparison.

Any #vintagebaseballhat /#vintagebaseballmemorabilia collectors out there ever seen the RAEFORD QUALITY stamp, like on the inside of this #vintageyankees #neweracap? Can’t find anything on the web. Thanks.