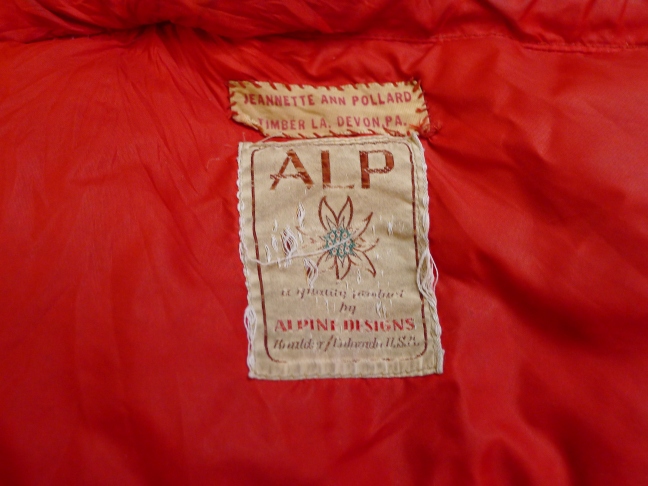 ALP by Alpine Designs followed the Alp Sport label, but predicated Alpine Designs in the company’s lineage. I’d estimate this bag to date from the mid to late 60s possibly into the early 70s. The Bag is constructed of nylon and down fill. Unlike many other bags of the latter era this is not a “Mummy Bag”. There’s no built-in hood, though there is a draw string around the top to seal in heat. The draw would be held closed by the leather tabs. This suggests the bag predates innovations such as the cord lock and the popularity of the mummy bag. The bag also has ties at the top to hold the bag when rolled, so it doesn’t come with a stuff sack. It could however be transported in that manner for safer keeping.

The bag measures 70″ long and 28″ across at the top. Above he ALP label is a personalized name tag, indicating its former owner was a female. The last name, Pollard is also stenciled on the outside back of the bag.
There’s no tag giving down fill left. The bag weighs 3+ pounds and the fill is still very much puffy. Over 6″ thick when zipped. I’d say the bag would be easily good down to low double digits, possibly single.